JAPAN: Abduction and Deprivation of Freedom for the Purpose of Religious De-Conversion (2011) 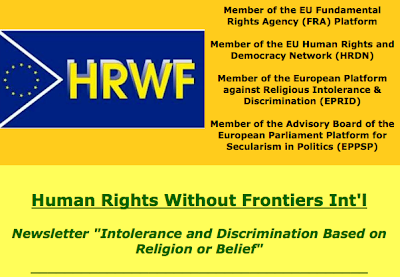 "One Cannot State that there is Freedom of Religion in Japan"
HRWF Brussels (31.12.2011) -  Human Rights Without Frontiers International (HRWF Int'l), an independent nongovernmental organization, today released a 62-page report that documents the abduction and confinement of Japanese citizens for the purpose of religious de-conversion, and the failure of Japanese police and judicial authorities to investigate and prosecute those responsible for such cases of domestic violence.

"The failure to provide the victims of such kidnappings with equal protection under the law, and the impunity of those responsible, constitute a serious violation of the Japanese people's constitutionally guaranteed rights and the international human rights standards to which Japan is legally bound," stated Willy Fautre, Director of the Brussels-based NGO Human Rights Without Frontiers Int'l.

Fautre and Aaron Rhodes, an international human rights advocate who helped organize the report, interviewed numerous victims, who were mainly members of the Unification Church and the Jehovah's Witnesses, as well as journalists, lawyers, and experts. They also met with 10 members of the Japanese Diet to discuss the issue.

The kidnapping and often violent forced detention of Japanese who have joined these religious movements, usually by their own families along with "exit counselors," has occurred for decades but has been ignored by police and judicial authorities despite unequivocal evidence of crimes.

"It is completely unacceptable that all known complaints against parents and exit counselors have been declared ineligible," Aaron Rhodes said.

"In the face of such official negligence and impunity, one cannot state that there is freedom of religion in Japan," he said.

Japan: Abduction and Deprivation of Freedom for the Purpose of Religious De-Conversion is available on-line at http://www.hrwf.net (On the homepage in the section "Our Reports").

Seoul, Tokyo, Bangkok, London, New York, Paris, Brussels (ICNK and HRWF, 19.12.2011) - The death of Kim Jong Il on 17 December 2011 represents a unprecedented opportunity for North Korea's new leaders, including Kim Jong-un, to turn a new page on the human rights situation in the country and put an end to widespread and systematic violations which have characterized the regime and brutalized the North Korean people for too long, said the International Coalition to Stop Crimes against Humanity in North Korea (ICNK) today. The North Korean government must cease these violations, end impunity and ensure justice for countless victims.

The leaders of DPRK should immediately put an end to practices such as forced labor, forced abortion of returnees, torture or executions, close all kwan-li-so (political prisoners' camps) and release all political prisoners and abductees, urged ICNK.

"North Korea remains a closed country and access is therefore urgently needed for independent and neutral human rights monitors, in particular the UN Special Rapporteur for Human Rights in North Korea and international humanitarian organizations", said Souhayr Belhassen, president of the International Federation for Human Rights (FIDH). The Coalition will continue its campaign for the establishment of a UN Commission of Inquiry to investigate crimes against humanity that have characterized North Korea today and in the past.


"The death of Kim Jong-il opens up an opportunity which the international community should seize, to help free the North Korean people from decades of brutal oppression. While there may be a period of uncertainty and instability in the days ahead, the international community should ensure that the severe human rights and humanitarian crisis in North Korea is placed firmly on the agenda alongside security and political concerns," said Benedict Rogers, East Asia Team Leader at Christian Solidarity Worldwide (CSW). "Action must be taken to bring an end to the regime's crimes against humanity and the culture of impunity."

The International Coalition to Stop Crimes Against Humanity in North Korea (ICNK) includes human rights campaigners from around the world, including Asia, Latin America, North America, and Europe. Survivors of North Korean prison camps, and their groups such as Free NK Gulag, have added their support to the Coalition.


NOTES TO EDITORS:
1.    The full statement summarising the objectives of the ICNK is as follows:

The International Coalition to Stop Crimes Against Humanity in North Korea unites the world's major international human rights organizations, campaigners for freedom for North Korea and survivors of the North Korean gulags in a global campaign seeking a full investigation of the regime's crimes against humanity through a United Nations Commission of Inquiry.


The Coalition aims to bring together all the key organizations and individuals working on North Korean human rights, because we believe that a common, united effort will influence international political and public opinion and send a powerful message to the regime.

The Coalition fully recognizes the need to deploy a wide range of skills and initiatives to bring change to North Korea, and completely respects the individuality of each Coalition member. Coalition members will be free to pursue a variety of approaches, but will unite in a common campaign to seek the establishment of a UN Commission of Inquiry.

Coalition members will include organizations and individuals from across the world, including throughout Asia, North America, Latin America and Europe.
2.    Members and supporters of the Coalition are as follows:


HRWF in the News about North Korea

The purpose of the present report is to provide a critical assessment of the work of the European Union Agency for Fundamental Rights (FRA) and to identify some shortfalls in the overall EU system of promotion and protection of EU fundamental rights and values. The work on the report has been guided by the premise that the new fundamental rights dimension of the EU policies, ensuing from the legally binding nature of the EU Charter of Fundamental Rights as incorporated in the Lisbon Treaty, makes it necessary for the European Union to develop and consolidate a genuine culture of fundamental rights at the level of both EU institutions and EU Member States broadly and when applying and implementing the Union Law.

The importance of a EU fundamental rights culture has been widely acknowledged but it is still in its nascent stages and risks to remain rudimentary, unless a proper institutional architecture is installed to support its development and consolidation. Notwithstanding the existing mechanisms and legal provisions in place, the whole system remains fragmented and reactive.

In its resolution of 15 December 2010, the European Parliament calls on the EU institutions and Member States to increase coherence among their various bodies responsible for monitoring and implementation of fundamental rights protection and to reinforce a cross-EU monitoring mechanism, as well as an early warning system, similar to the UN Universal Periodic Review. However, the European Union still lacks a comprehensive internal human rights structure to ensure cross-institutional coordination and to allow each institution to build upon other institutions' reports and institutional expertise acquired in the process of their autonomous processes of conducting compatibility checks and impact assessments of legislative proposals and policies.

On its side, the European Union Agency for Fundamental Rights (FRA), which has been in existence since 2007 as a "focused observation and assessment agency on Union policies", falls short of filling the gap of a much-needed early warning mechanism and ex ante examination of breaches or risk of breaches of EU fundamental rights. Most importantly, FRA fails short of fulfilling two important criteria underlying the UN Paris Principles governing the work of National Human Rights Institutions (NHRIs), i.e. a broad mandate and full-fledged independence.

Despite these deficiencies, the EU Agency for Fundamental Rights still can carve an important role for itself in the overall EU fundamental rights architecture, if properly resourced, mandated and politically supported. In this respect, the objective of this report is to raise critical questions at a period when the Agency is coming to the end of its first five-year Multiannual Framework (MAF) and starts planning for its second five-year cycle of existence. This should be seen as a critical juncture of the institutional learning process of the EU Agency for Fundamental Rights. It is therefore an opportune time to assess the Agency's position and role within the EU fundamental rights architecture as well as its added value and ability to mobilise resources and expertise to fulfil its mandate within the context of the prescribed broad-based participatory process of consultations within the EU and its Member States.