Religious symbols and reminders of religious freedom: My purchase of a menorah 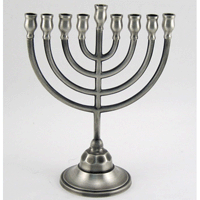 I announced to my family a few weeks ago that I was going to purchase a menorah. They looked at me kind of funny, wondering why I, being a Christian, would do such a thing. But as I was reading about Hanukkah (or Chanukah), I was struck by the symbolism of the menorah and its relationship to religious freedom. Although it is not a part of my religion, it still bears some sacredness for me.

The story goes like this: In 175 BCE, Antiochus IV, the Syrian king of the Seleucid Empire, invaded Jerusalem and recaptured Jerusalem. His soldiers plundered and looted the temple, putting a stop to further temple worship. The practice of Judaism was outlawed, which prompted the successful Maccabean revolt in 165 BCE and the subsequent rededication of the temple.

According to wikipedia: "The festival of Hanukkah was instituted by Judah Maccabee and his brothers to celebrate this event. After recovering Jerusalem and the Temple, Judah ordered the Temple to be cleansed, a new altar to be built in place of the polluted one and new holy vessels to be made. According to the Talmud, olive oil was needed for the menorah in the Temple, which was required to burn throughout the night every night. But there was only enough oil to burn for one day, yet miraculously, it burned for eight days, the time needed to prepare a fresh supply of oil for the menorah. An eight day festival was declared by the Jewish sages to commemorate this miracle."

The martyrdom of Hannah and her seven sons is also linked to Hanukkah. Antiochus, in his demonstration of control over the Jews and their religious practices, had required her sons to eat pig or to be put to death. Each son, in turn, refused, and was, as promised, killed. Prior to the youngest son's death, Antiochus had appealed to Hannah to convince her youngest to eat pig rather than to die. But Hannah was not swayed and the son refused, and that son, as well, was put to death. Ultimately Hannah, too, suffered death in connection with these events. Her and her sons' courage and strength are commemorated to this day.

I wanted to purchase the menorah so that I would have this symbol as a reminder of these important events and of the strength and courage of these Jews nearly 2200 years ago and so that I could teach my children about these things. The principles that the menorah represent are universal and bear meaning to this non-Jew. And so today I finally received my "traditional pewter menorah" in the mail, having ordered it from Judaica.com, and was pleased to bring this symbol into my home.

This article was posted by James Blood on the International Religious Freedom Blog.
Posted by Peter Zoehrer at 15:12