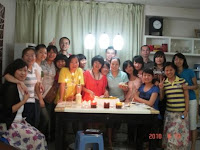 GUANGZHOU--On August 13, 2010, after a brief detention by people from the Ministry of State Security, Pastor Wang Dao of Liangren Church in Guangzhou contacted ChinaAid President Bob Fu, requesting his assistance in issuing an urgent call for prayer. After translating the document, ChinaAid released the letter to Chinese media earlier today.

Peace in Christ!  Thank you for taking great risks in fighting for the rights of the persecuted Christians in China, including your care and help for Liangren Church of Guangzhou. The rights defense attorneys who work side by side with you are like angels.  Wherever there is a need for them, there is their presence!  Please accept our heartfelt gratitude for you!  May God keep a record of the hard work you have done!

Sometimes, we are too naïve and innocent in believing that we can gather in peace for a while, but the facts have told us that we should not harbor any delusions (about our situation) for Satan.  Let me send you information of what we have gone through in the past two days.  Following is the intercession message of our church.  Please continue to pray for us in our fight!  Immanuel!

“Liangren House Church of Guangzhou has again been suppressed and driven away by the Guangzhou authorities!”

On August 11, under great pressure from the Public Security office in Guangzhou, Zhuying Garden Hotel was forced to unilaterally terminate the rental agreement with Liangren Church. It was a one-year lease contract the Zhuying Garden Hotel had signed with us, of its own initiative, on July 16.  However, the agreement was terminated after only one month of existence!
In the past two years starting from May 12, 2008, our church has had to move several dozens of times. Because we could not rent a place, we had to worship outdoors in the open on two Sundays.  Because our pastor strongly refuses to stop the house gatherings, he was placed on a 36-day criminal detention on May 8, 2010.  On June 13th, as the result of prayers by churches around the world and broad international concern, his sentence was changed to bail-pending-trial.

In the past two days, Pastor Wang has been unreasonably harassed on many occasions in his home in Chengzhong Village, by the Domestic Security Protection Squad, the Luopu Police Station, and other government agencies.

On August 12, five people from the Domestic Security Protection Squad, led by Officer Yang from Luopu Police Station, came to his house and threatened him:  If he refused to go to a TSPM (Three-Self) church for his religious activities, they would drive us out of the house we currently rent in Chengzhong Village.

After that, people from House Rental Administration of the Village Party Committee came to his house to book his personal information; they also demanded that his landlord install fire extinguishers, (placing a greater financial strain on the landlord).

At about 10 AM on August 13th, Yang and the Domestic Security Protection Squad came to Pastor Wang’s home to summon the pastor and his wife.  His wife happened to not be at home, so she did not go with the authorities.  Pastor Wang was not released until noon.  In the police station, Pastor Wang was seriously warned that he is not allowed to engage in religious activities.

Due to the harsh reality of our circumstances, we again find ourselves in a dilemma where we are unable to find a place where we can gather!  However, we still firmly believe in God’s precious promise: “Moreover I will appoint a place for my people Israel, and will plant them, that they may dwell in a place of their own, and move no more; neither shall the children of wickedness afflict them any more, as it was in the beginning.” (2 Samuel 7:10)

Please continue to pray for us and please also forward this message to our fellow Christians you know.