Civil Society, Not Laws That Restrict Freedoms, Should Promote Tolerance 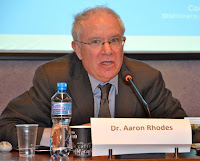 We have confronted many tragic cases of incitement to racial hatred and violence, and hate speech, leading to many crimes by citizens and human rights violations committed by states.In the Balkans, the media fomented hatred that led to crimes topped off by what happened at Srebrenica.  The warnings about possible genocide from hate speech were ignored in Rwanda.  The Helsinki Federation did research on this and published a book on hate speech in the Balkans.  Being a trans-Atlantic group, there were many debates about how far freedom of speech should be restricted in order to clamp down on hate speech.


In Chechnya, violence was encouraged and made possible by a campaign of hatred about people from the Caucasus region.

In the course of this terrible war, the Russian government had passed legislation criminalizing the incitement to racial and ethnic hatred and violence, under pressure from European governments to bring its laws into compliance with the European Convention, and many were worried about racial crimes in Russia, which are a very serious problem.


The Russian-Chechen Friendship Society was a small NGO located in Nizny Novgorad, which promoted tolerance, complained about racism and indeed, denounced racial and nationalist incitement in the Russian state-controlled media.  In 2006, the director of the group, Stanislav Dmitrievsky was convicted by a court for—guess what?—“inciting racial hatred.”  The evidence used to convict him was articles he had published suggesting the Russians negotiate with Chechens to end the bloody war.  The Russian Chechen Friendship Society was forced out of existence and its other leader is now living in Finland.


While this may be an extreme case, it is not the only one in which such laws are turned against human rights in an exaggerated and distorted exploitation of contradictions in human rights law.The human rights community largely overlaps with a community of civil society that wants to promote tolerance and understanding.  But the human rights community needs to be vigilant that fundamental liberties can be eroded by attempts to create a perfect world, where no one offends anyone else, for fear of winding up in court, or in jail.


II Contradictions in international law and their sources
I believe the anti-hate speech laws in Europe can be exploited by a new form of authoritarianism aimed at dissolving social tensions—just like what happened to the Russian Chechen Friendship Society.   In this analysis I want to draw upon the research of my colleague Jacob Mchangama, who is a human rights lawyer in Denmark.


He points out that while the European approach toward protecting the freedom of expression and the problem of hate speech was framed in the context of the Holocaust.  But the more recent developments have reflected a desire to secure tolerance and combat racism and extremisms in a multi-cultural Europe.


The prohibition against hate speech is a legally binding international obligation under Article 20 of the International Covenant on Civil and Political Rights.

The first draft of this convention, which was written by the United States government, limited the restriction of speech to the prohibition to any advocacy of national, racial or religious hatred that constitutes an incitement to violence.


Banning incitement to violence is an acceptable restriction on free speech, but this was not enough for other states who entered the debate.  The Soviet Union, as well as Yugoslavia and other communist countries insisted on expanding the prohibition to include incitement to hatred and hostility, saying the freedom of expression could be abused.


The opponents of Article 20 noted the arbitrariness of the terms “hatred” and “hostility.”  Eleanor Roosevelt herself said the language was dangerous and could be exploited “to render other articles null and void.”


The UK delegate to the Commission on Human Rights noted that during World War II, Mein Kampf had not been banned in the United Kingdom.


The vote on the Article was split along Cold War lines in the UN’s Third Committee.  Article 20 was voted into law by the Communist states of Eastern Europe, as well as by countries with very dubious human rights records including Saudi Arabia, Haiti, Sudan and Thailand.  As my colleague Jacob Mchangama wrote, “The internationalization of hate-speech prohibitions in human right law owes its existence to a number of states where both criticisms of the prevalent totalitarian ideology as well as advocacy for democracy were strictly prohibited.”


A similar process took place in drafting the International Convention on the Elimination of All Racism and Discrimination, which declared “the dissemination of all ideas based on racial superiority or hatred, incitement to racial discrimination” as offenses punishable by law.  Despite objections that any punishment of ideas can promote tyranny, as a Columbian delegate warned, again the authoritarian and totalitarian countries lined up to support the language.
III The role of civil society
The best protection against hate crimes and against the destructive and painful effects of hate speech and racial incitement is respect for the dignity of other people, instilled by parents, schools, religious organizations, and through the arts and media.  Perhaps I am cynical after so many years working in human rights, but I fear it is not difficult to understand why so many nondemocratic states have jumped on the strong language in ICERD—it is because ICERD makes the state responsible for eliminating discrimination through coercive measures.

Let me quote my friend Jacob again: “The idea that deliberate state action—even at the expense of individual liberty—is the principle vehicle for social change and human progress is the hallmark of socialism, fascism, communism and in some cases forms of progressivism.”   Such laws can legitimize and justify repression, as in the case of our friends in the Russian Chechen Friendship Society.


The hate speech laws in Yugoslavia certainly did not stop hate speech from poisoning the feelings of ethnic groups against each other; and don’t forget that in Weimar Germany, prominent Nazis were convicted under laws that prohibited incitement to class struggle and to religious insult.  Julius Stricher, the editor of the virulently anti-Semitic magazine Der Sturmer, was twice jailed for his tirades against Judaism and Jews.  That did not stop the rise of the Nazis, who abolished the freedom of expression when they seized power in 1933.


What is more, as Mchangama further notes, there is apparently no correlation between the existence of hate speech laws and reductions in incidents of racial violence and hatred.  These problems have been on the rise in precisely the countries where such laws have long existed.


It is up to us in civil society to convince our fellow citizens that, especially in pluralistic societies, which are becoming more common in the world, we owe one another respect, as equals.  We should not expect state and international bureaucracies and coercive laws to eradicate hatred and intolerance.  We should make this our own task.
_________________________________
Dr. Aaron Rhodes - fr. Director of the
International Helsinki Federation
is international Human Rights Consultant
Posted by Peter Zoehrer at 00:39