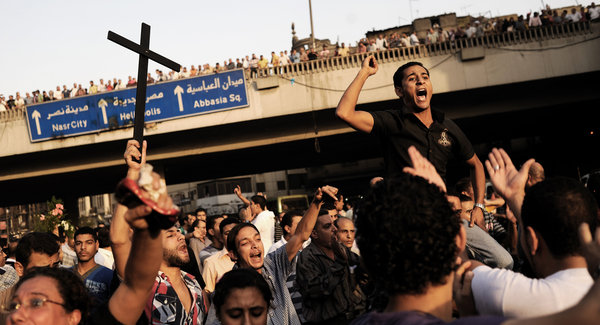 The New York Times
Coptic Christians demonstrated in Cairo on Monday in reaction to the deaths the night before of at least 24 people in clashes between Copts and the army. More Photos »

CAIRO — An angry crowd of thousands gathered at the largest cathedral here on Monday to mourn the death of two dozen Coptic Christian demonstrators killed the night before in clashes with security forces, as liberal activists lamented the military’s increasingly tight hold on power.

The bloodshed appeared to mark a turning point in the revolution, many here said. It comes just eight months after Egyptians celebrated their military as a savior for its refusal to use force against civilians demanding the ouster of President Hosni Mubarak. Confidence in the military had already been eroded by its repeated deferrals of a handover of power to civilian rule, now set to take place perhaps as much as two years after parliamentary elections, set to begin next month.

Now political liberals as well as Copts said the brutal crackdown had finally extinguished the public’s faith in the ruling military council as the guardian of a peaceful transition to democracy.

“The credit that the military received from the people in Tahrir Square just ran out yesterday,” the party leader Ayman Nour said at a news conference of prominent parties and political leaders denouncing the military. “There is no partnership between us and the council now that the blood of our brothers stands between us.”

Others took an even darker view, saying that the violence suggested that the military may now hold an even tighter grip on power than Mr. Mubarak did.

“Cairo yesterday was a part of Syria,” said Shady el-Ghazaly Harb, a liberal activist who helped set off the revolution, invoking the violent crackdown against that country’s uprising. “This is a threat not just to the Copts, but to all of the people. We saw what would happen if we rose up against the army.”


Witnesses, victims and doctors said Monday that demonstrators were killed when military-led security forces drove armored vehicles over as many as six people and fired live ammunition into the crowds. Doctors at a Coptic hospital showed journalists 17 bodies, including one with a crushed skull and others with mangled limbs.

Doctors and Interior Ministry officials said bullet wounds accounted for most of the deaths, including that of Mina Daniel, a young political activist a doctor said had been shot in the shoulder and leg. More than 300 others were wounded in four hours of street fights, the Health Ministry said.
The military council did not explain Monday why shots were fired or why military vehicles ran over demonstrators.

In a statement on state television, it appeared to distance its officers from any responsibility for the deadly clashes. The statement referred only to unspecified “unfortunate events” that “transformed peaceful protests to bloody ones.” Expressing “deepest condolences to the families of the victims,” the military reiterated its determination to refuse “attempts to cause a rift between the armed forces and the Egyptian people.”

The military also sought to appease the Coptic Christians, about 10 percent of the population here. Although the Copts had embraced the revolution’s promise of a tolerant and pluralistic democracy, many have been uneasy as the removal of Mr. Mubarak’s iron fist has unleashed suppressed rivalries, as in the recent dispute over the construction of a church near the southern city of Aswan that inspired the march in Cairo on Sunday.

The military said it had asked its civilian prime minister to begin an investigation into the violence, and Egyptian news organizations reported that at least 15 suspects were being prosecuted in military courts for instigating the riots.

The civilian cabinet, meanwhile, announced a series of long-promised measures to deter discrimination. The measures would impose jail time and large fines on anyone found guilty of discrimination on the basis of religion, with heavier penalties for government employees. And to address the legacy of cumbersome rules on permits to build churches, the cabinet said it would implement a law to standardize procedures for all houses of worship.

The minister of information also backed away from state television coverage of the protests on Sunday that urged “honorable Egyptians” to defend soldiers from a mob of armed Christians. The announcers who made those statements were “under emotional stress,” the minister, Osama Heikal, said, according to the Web site of the state-run newspaper Al Ahram.

While the liberal parties denounced the military’s handling of the protest, the Muslim Brotherhood​, the Islamist group considered the principal opposition under Mr. Mubarak, adopted a tone notably more sympathetic to the government.

Mahmoud Ghozlan, a spokesman for the group, said in a statement that while both Muslims and Christians faced problems during the “critical phase” of the transition, “there was no need for the peaceful protests to metamorphose into violent clashes.” He added: “Under no circumstances should violence and aggression be a solution.”

Coptic leaders issued an unusually pointed statement charging that the demonstrators were set up to take the blame for a crackdown. “Strangers got in the middle of our sons and committed mistakes to be blamed on our sons,” the statement said, claiming that acts of discrimination or aggression against Copts repeatedly “go unpunished.”

In a measure of their growing distrust of the military-led government, the families of the Copts killed in the violence decided they did not trust government-run facilities to perform autopsies, fearing the results might hide evidence of the violence by security forces. After hours of deliberation with priests, activists and human rights groups, they arranged to bring forensic teams to a Coptic hospital, causing the funeral to be called off.

Inside the hospital, Mariam Telmiz, 40, sat at the bedside of a brother-in-law who had been wounded by a bullet at the demonstration. Another brother-in-law had been killed by a bullet.
The military was ready to protect Egyptian Muslims who carried a Saudi flag or even pulled the Israeli flag off its embassy, she said, “but the one who holds his cross high gets humiliated.”


Our World: The forgotten Christians
of the East

It is unclear what either Western governments or Western churches think they are achieving by turning a blind eye to the persecution of Christians in the Muslim world.