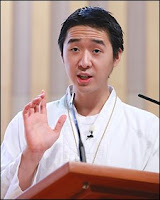 It is one of the most controversial religious movements of the last century.

Founded in Seoul in the 1950s by the Reverend Sun Myung Moon, Unificationism has attracted hundreds of thousands of members worldwide. But the movement has been accused of cult-like practices, with its leader's followers dubbed "Moonies". As Sun Myung Moon approaches his 90th birthday, he has handed over key responsibilities to one of his sons.

Hyung Jin Moon is just 30 years old and grew up in the United States, where he studied theology at Harvard University.
His background means he has already been exposed to a wide range of religious traditions and seems unafraid to introduce aspects of how other faiths worship into Unification Church services.
Attending a meeting for English speakers on a Saturday afternoon at the Unification Church's Korean headquarters, the very first sounds I heard were pretty unexpected.
Family values
Earlier that week, I had interviewed Hyung Jin Moon and met members of the church's choir, rehearsing for the weekend's services.
They had been singing a specially written song about true love, reflecting the traditional family values which are so important in Unificationist beliefs.
But the service I attended began not with one of the movement's own hymns, but with contemporary mainstream Christian songs written in the US.

"It's modified greatly, where now people can meet, they can date, find out about each other"