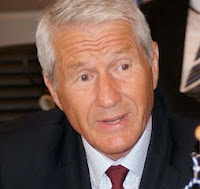 VIENNA, 1 July 2010 - Intensified co-operation between the OSCE and the Council of Europe is needed to reinforce both organizations' work to promote democracy, human rights and the rule of law and to avoid duplication, said the Secretary General of the Council of Europe, Thorbjørn Jagland, in Vienna today.
Addressing the OSCE Permanent Council, Jagland discussed reforms at the Council of Europe, European Union accession to the European Convention on Human Rights and reinforcing interaction with international partners, including the OSCE.
Jagland stated that the co-operation between the Organizations at political and expert level can be further improved: "Our objective should be to ensure, to the highest extent possible, the coherence and effectiveness of our activities, whilst avoiding duplication and a waste of resources."
He added: "Europe is challenged by new and demanding forces, by the economic crises, by the social unrest and by the ever-growing multicultural dimension of its societies. The European institutions will be, and must be, crucial actors in this situation."
The Permanent Council is a main decision-making body of the 56-country OSCE. It meets weekly in Vienna to discuss developments in the OSCE area and to make appropriate decisions.
(Photo: FOREF Europe)