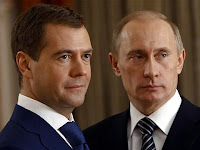 We, the undersigned, write to communicate our concerns regarding the escalating threats to religious freedom in Russia. We are writing to respectfully request that you both address these urgent issues and immediately begin to establish policies that uphold the Russian Constitution and international commitments.

Article 29 of the Constitution of the Russian Federation guarantees freedom of religion, including the right to profess either alone or in community with others any religion or to profess no religion at all, to freely choose, have and share religious and other beliefs and manifest them in practice.  Article 30 provides that everyone shall have the right to freedom of association.

Further, Russia has signed the Universal Declaration of Human Rights, and has signed and ratified the International Covenant on Civil and Political Rights, and the European Convention on Human Rights.
Yet the use of the 2002 Extremism Law to combat "religious extremism" and, coming against an established pattern of local government obstruction of non-Russian Orthodox religious communities, this has led to a crackdown on religions that has been termed by Forum 18 News Service as the new "Inquisition."

In 2007, the first bans on religious literature were implemented, and the Federal List of Extremist Materials was initiated.  Then, in 2008-2009, the Justice Ministry reconstituted its Expert Religious Studies Council and gave it wide-ranging powers to investigate the activity, doctrines, literature and worship of religious organizations, and then recommend measures.  The appointment of renowned "anti-cultists" and controversial scholars to the Council provoked an unprecedented outcry from many religious representatives and human rights defenders.

In coordination with the Expert Religious Studies Council, local Russian authorities and low-level courts are instigating cases that create an increasingly hostile environment for non-traditional religions, and result in investigations, armed raids, nationwide bans on certain religious literature that has been published and read worldwide for decades, and even dissolutions and liquidations of religious organizations.

The Federal List of Extremist Materials now runs to 573 items. Therefore, we have a deep concern about the oppression and obstruction of religions in Russia, and for the resulting violations of individual rights to freedom of thought, conscience, religion and association, all in contravention of the Russian Constitution and international human rights laws.

The Russian Government should make good on Russian guarantees of freedom of religion and association for every individual and religious community, and it should honor its international human rights obligations and commitments.
Posted by Peter Zoehrer at 22:52