Human Rights in CHINA: The Art of Social Advocacy

The Art of Social Advocacy 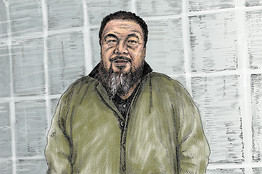 Beijing, He may not be China's most famous living artist, but Ai Weiwei's stature defies all odds: He not only delights in infuriating Chinese officials, but this soft-spoken, multitalented artist, known best for his performance and conceptual work, also eschews cocktail parties and claims to spend a mere 5% of his time thinking about or creating art.

Still, Mr. Ai, 53, is undoubtedly China's most outspoken artist. In 2008, as the rest of his country cheered on the Olympics here, the co-designer of the most iconic symbol of that year's Games—the National Stadium, also known as the "bird's nest"—stirred a tempest by insisting there was nothing to celebrate. He accused the Chinese government of putting on a charade, showcasing its modern facilities and economic might while depriving its own people of dignity and basic rights. He called it a fake coming-out party and coined an alternate slogan for Beijing's global welcome: "Pretend smile."

Mr. Ai himself doesn't smile much.


"I probably spend 30% of my time meeting with people whose wife has vanished, or son is missing or been arrested without evidence," he says when we met earlier this month in his art studio north of Beijing. "They tell me about their problems, things they should really tell officials. But nobody else is listening."

Mr. Ai spends six to eight hours each day online, largely on Twitter. His blog was blocked long ago.


"I'm totally banned in China. Nobody can talk about me or my work," he says, stroking his signature beard. Then, with a grin, he adds: "At least, not officially."

When Mr. Ai was placed under house arrest last November, news immediately spread around the world.


"The Internet is a miracle," Mr. Ai says. "It is the thing that will change China, definitely. Of that, I have no doubt."

All this would seem to leave Mr. Ai scant time for making art; instead, it's fueled a prolific and meteoric career. He mounted more than a dozen shows last year, including an exhibit at London's Tate Modern (through May 2, 2011) that features 100 million porcelain sunflower seeds, individually crafted by 1,600 workers. Mr. Ai is also among China's most well-known architects and photographers. He has two major shows soon: a retrospective in Switzerland of his photography and an exhibition in Austria of his architecture.

That he can achieve all this without much time for meetings or networking is all the more astonishing since such work normally demands total immersion and constant self-promotion. Of course, it helps that the Chinese government buoys Mr. Ai's fame by keeping him in the news.

At the time of our meeting, Mr. Ai was again making headlines. He had just returned from Shanghai, where on Jan. 11 he watched as authorities demolished his studio there. It was part of a $1 million artistic community center that local officials had asked him to build, hoping Mr. Ai's presence would anchor a new arts district like Beijing's 798 (which he had helped found). The plan worked: With Mr. Ai on board, other artists flocked to the new area. But the welcome mat was soon yanked from under him, Mr. Ai maintains, because of his social advocacy.

Officials had hoped to quietly raze the Shanghai center. When they first told Mr. Ai last year that they planned to tear down the building, he mischievously promised a huge farewell party featuring river crab—which in Mandarin sounds like the term for harmony, the ideological buzzword of the Communist Party. This outraged officials and resulted in Mr. Ai's November confinement at his Beijing home, guaranteeing that word would spread throughout the Internet.


"It's so predictable," he says, almost sympathetically.

China is used to shocking stuff from this bold artist. He's spent years fighting for a full accounting of student deaths from the 2008 earthquake in Sichuan. One of his most powerful works fills a studio wall with the names of 5,000 children. They were in the 20 schools that turned to dust while the surrounding buildings stood firm, he notes. Officials still refuse to investigate the apparent corruption that resulted in such substandard construction or to acknowledge such a large number of deaths. Instead, they respond with repression and arrests. Several advocates have been detained. When local writer and activist Tan Zuoren went on trial, Mr. Ai flew to the provincial capital of Chengdu but was prevented from attending. "Police beat me, and I nearly died," he says. In Germany for a subsequent art exhibit and suffering from headaches, he saw a doctor and was rushed into surgery to drain blood from his brain.

Critics suggest that Mr. Ai uses advocacy to further his career, and hides behind the security of a foreign passport. "I'm here on a Chinese passport, like everyone else," he responds. While he spent a dozen years in New York, his was a textbook story of the struggling artist. He snapped the odd picture for newspapers, but mostly survived as a day laborer, often demolishing buildings.


"I really had a funny feeling when I watched my studio in Shanghai go down," he confesses. "I was sad, but I also thought, 'Man, they really know what they are doing.'"

Mr. Ai's life in the U.S. was, by his own admission, rather aimless. He returned to China in 1993, when his father, Ai Qing, became ill. Back in Beijing, he resumed a life of such leisure that his mother threatened to call the police on him. "After 12 years in the U.S., I came back without a diploma or green card, and no money. I was just hanging around with friends, smoking and playing poker. That's all we did."

To escape the parental nagging, he fled to the outskirts of Beijing, to a bleak village called Caochangdi. It's now one of Asia's chic artist colonies, along with nearby 798.


"It was land nobody wanted," he says. "When I saw it and heard a train go by, I thought: 'This is perfect. Nobody will ever want to come here and develop such a place.'"

Mr. Ai reckons he's responsible for the design of perhaps 100 units around Caochangdi. Other artists began hankering for similar spaces, and many found them in the abandoned warehouses at 798.

Celebrated internationally, Mr. Ai has largely escaped a backlash against his activism. Until now. Days before we met, his first major exhibit at 798 was abruptly canceled. Yet there is little chance he will back down. Perhaps unapparent earlier to his parents, his veins are unquestionably filled with the blood of his father, an artist and celebrated poet exiled to a labor camp during Mao's purges. Ai Weiwei grew up in China's desolate Xinjiang province, watching his father clean toilets.

Why put himself at similar risk? "No reason, really," Mr. Ai says, mumbling into his beard. But then he rises up, adding:


"I want to have a purpose, to protect the dignity of life. I feel it's ridiculous to live in a condition where people cannot access their rights. I don't want children to live in this situation.

"We have a responsibility, as artists, to fight for better conditions. I see freedom and justice as basic, fundamental rights for everyone. I'm just in this position to make my voice heard."

He acknowledges that his fame, and friends around the world, afford him that ability.

"But there are a million people like me in China. I don't think they can stop us all."

This copy is for your personal, non-commercial use only. Distribution and use of this material are governed by our Subscriber Agreement and by copyright law. For non-personal use or to order multiple copies, please contact Dow Jones Reprints at 1-800-843-0008 or visit
Posted by Peter Zoehrer at 16:57