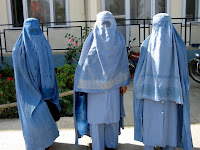 PARIS: France is moving towards outlawing full Islamic veils in certain public buildings, stopping short of a broader ban that could violate the right to religious freedom, Le Figaro newspaper reported on Wednesday.

“Permanently masking one's face in public spaces is not an expression of individual liberty,” Jean-Francois Cope, the parliamentary party leader of Sarkozy's UMP party, said in an opinion piece in newspaper Le Figaro. “It's a negation of oneself, a negation of others, a negation of social life,” he said, but conceded that a complete ban faced certain legal obstacles.

Le Figaro quoted advisers as saying such a ban could be challenged before the European Court of Human Rights on the grounds that it hurt religious freedom.

Instead, the government will seek to banish the garments from public buildings such as town halls and police headquarters, where it can cite security concerns, it said. Universities, streets and public transport would not be touched by the ban.
Posted by Peter Zoehrer at 19:22