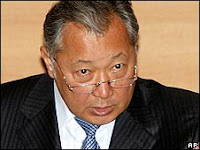 Media watchdog groups have called for an immediate investigation into the murder of Kyrgyzstan journalist Gennady Pavlyuk.
(Left : Pres. Bakiyev, Kyrgystan)
Reporters Without Borders and the International Press Institute also warned of increasing dangers to journalists in the region.

Last week, Mr Pavlyuk was apparently thrown from the sixth floor of an apartment building in Kazakhstan.
He died on Tuesday after several days in a coma.
Police in Kazakhstan said Mr Pavlyuk's death was being treated as murder.
He was visiting the Kazakh city of Almaty where he was found at the foot of the apartment building, with his hands and feet bound with duct tape.
Pressure pattern
Human rights groups say attacks on Kyrgyz journalists have become increasingly frequent.
"There must be an immediate, thorough and transparent investigation," said David Dadge, director of the International Press Institute.
"This was a particularly brutal and callous murder, and I would encourage the international community... to vocally condemn Pavlyuk's murder and to pressure the authorities in Kazakhstan and Kyrgyzstan to make sure that this case does not join the appalling list of unsolved attacks on Kyrgyz journalists," he added.
Mr Pavlyuk, a leading critic of Kyrgyzstan's President Kurmanbek Bakiyev, had been planning to set up a newspaper for the Kyrgyz opposition.
He was hospitalised on 16 December in Kazakhstan's capital Almaty, according to Kazakh media reports, with multiple injuries, including broken ribs.
"There is a version that it is an attempted murder," a Kyrgyz interior ministry spokesman told AFP.
"Ten days ahead of taking over the presidency of the Organisation for Security and Cooperation in Europe (OSCE), the Kazakh authorities cannot allow a murder like this to go unpunished and the Kyrgyz side must cooperate in resolving this case", Reporters Without Borders said.
The advocacy group noted that the attack on Mr Pavlyuk was the third in a week launched against Kyrgyzstan journalists of Russian origin.
Political analyst Alexander Knyazev was attacked in the capital Bishkek on 9 December and the correspondent for Russian news agency BaltInfo, Alexander Evgrafov, was struck and threatened by uniformed police on 15 December, it reported.
The IPI also pointed out that the 2007 murder of an Uzbek journalist in Kyrgyzstan had yet to be solved.
Posted by Peter Zoehrer at 13:12