Switzerland: The Minaret Ban and it's Implicatiohs 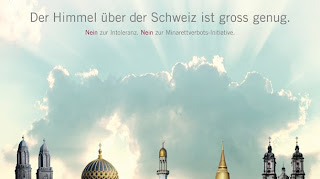 “Religious Freedom as the Prerequisite for Interfaith Dialogue”
The Minaret Ban and its Implications
This speech has been given by Peter Zoehrer, FOREF Europe
(Thursday, December 03, 2009, at 5:30 PM, Vienna International University)


Ladies and gentlemen: in 1948, exactly 61 years ago, the United Nations adopted the Universal Declaration of Human Rights which operates as an authoritative guide in the field of human rights. FOREF Europe seeks to promote the vision of religious freedom found in Article 18 of the Declaration:


Everyone has the right to freedom of thought, conscience and religion; this right includes freedom to change his religion or belief, and freedom, alone or in community with others, and, in public or private, to manifest his religion or belief in teaching, practice, worship and observance.


The Universal Declaration of Human Rights has largely been drafted by experts of religion.
Yet, in spite of the existence of those clear standards during the recent decades humanity has suffered numerous conflicts that have been marked by religious intolerance.
The possibility of religious wars always looms ominously above our heads like the sword of Damocles.
Therefore continuous inter-religious dialogue is of paramount importance to overcoming misunderstandings amongst peoples of differing religious backgrounds.
One popular Austrian saying contains a simple, yet profound truth: “Talking to each other brings the people together!”
The following issues have recently caused great controversies and even ignited religious hatred on our European continent:

From the viewpoint of human rights standards there is no doubt, that such a ban on building minarets is violating religious freedom. The point however is that during the recent years the fear of Islamist extremism has swept throughout the European continent. These concerns are very real. They don’t just go away by governments, religious leaders liberal media or rights defenders preaching to people or accusing them of intolerance or xenophobia.

The outcome of this referendum has an immensely populist appeal in most European Countries. Thus, the nationalists and right -wing demagogues are having a feast in misusing this angst for their own political agendas.
Just as the initiators of the Swiss referendum have used the discrimination of Christians in the Islamic world (no Christian Churches allowed, Christians are persecuted in 57 countries – most are Islamic nations, etc.) as powerful argument to back up their case, so do the rightwing political leaders in Austria (i.e. H.C. Strache) and their colleagues  in most EU countries.
Already the United Nations as well as the OSCE has called the minaret ban a clear violation of religious freedom (Art. 18 – Universal Declaration of Human Rights).
But more importantly also the leaders mainstream Churches have joint solitarily with the Muslims all over Europe in denouncing the Suisse minaret ban!
THE CRISIS
As already Confucius has said: “In every crisis there is also a great opportunity!”
Ladies and gentlemen, this current crisis is definitely to be seen as a great opportunity for religious leaders to engage in serious inter-religious dialogue.
Especially for Muslim religious and political leaders outside the EU it is not enough to voice their anger and complaints. It would be more helpful if they try to view this crisis as a chance to reciprocate the goodwill of the Christian leaders in Europe. This would mean for them to review and change their extremely strict, discriminating laws in numerous countries which severely infringe upon the religious freedom of Christian and other religious minorities. Why not? Such a move would take out some wind from the sails of the “anti-Islam preachers”.  As I am repeatedly told by my Muslim friends, the true meaning of “Jihad” is “great effort towards Gods will”. If that is so, there could be a theological justification for declaring “Jihad” against religious discrimination. In any case, it would be a great leap for inter-religious reconciliation and world peace


Religious Freedom as a fundamental human right
"The right of freedom of conscience and belief … religious freedom constitutes the very foundation for the other fundamental freedoms of man!” Late Cardinal Franz KÖNIG (Austria)
For a religious person, can there be any other right more important than the freedom to worship your creator and follow his will in the way your conscience commands you to do? Ladies and gentlemen, the importance of religious freedom has been dismally neglected by political leaders! On the other hand, great human rights defenders have always regarded the freedom of faith and conscience as the “mother of human rights”. Therefore, the significance of religious freedom for creating social harmony and world peace cannot be emphasized enough.


Religion can be a powerful force for World peace:
Sadly, throughout history religion has often been misinterpreted, misunderstood and misused for hegemonial interests, discrimination and even violence (Crusades, inquisition, religiously motivated wars until today).
If a particular religion claims to be exclusively assigned by divine providence to be the only one, the human rights of people of other faiths or convictions can be severely endangered.
As a great Christian leader from Geneva, Rev. Dr. William McComish has recently stated: at a UN Meeting: “Never quote a spiritual source to justify discrimination or violence!”
That is the very reason why true religious leaders and defenders of religious freedom always emphasize the importance of religious tolerance.
Religion has always played a central role in the protection of human rights, especially in the promotion of human dignity. For example the abandonment of slavery was inspired by the biblical concept of “Imago Dei” (Genesis: All men are created in the image of God).

What makes religion strong in the protection of human rights and human dignity is:
Tolerance and religious freedom are essential prerequisites for inter-religious dialogue.
As Dr. Hans Küng has stressed in his “Project World-Ethos”, there needs to be the mutual affirmation of the fact that different religions have more points in common than there are points of disagreement.

To overcome the current impasse in the dialogue amongst religions and cultures a real paradigm shift maybe unavoidable:
Rather than seeing each other as competitors, religious leaders need to see each other as individual members of one global village or even one big world family.  That means, in spite of our doctrinal differences we practice mutual respect and love and towards each other. Only by joining our forces we may be able to tackle the real problems of humanity, which are targeted in the UN Millennium Development Goals (extreme starvation, child mortality, epidemics, etc).

"Each civilization should be judged by the way it treats her minorities!” Mahatma Gandhi
The escalation of religious intolerance and discrimination throughout the new Europe should be a matter of great concern to our political leaders, the European Union and the United Nations.
This is not just a mere assumption. Even governments and powerful state sponsored organizations are still supporting the agents of intolerance and discrimination (of minor religions and new religious movements).
Ladies and gentlemen, it is exactly this kind of religious discrimination that Article 18 was designed to prevent. This is made clear by the UN Human Rights Committee, which in its Comment 22 states:
Article 18 is not limited in its application to traditional religions or to religions and beliefs with institutional characteristics or practices analogous to those of traditional religions. The Committee therefore views with concern any tendency to discriminate against any religion or belief for any reasons, including the fact that they are newly established or represent religious minorities that may be the subject of hostility by a predominant religious community.

Various European governments have created “black lists” of religious minority groups. Sadly, according to the motto “big fish eats little fish”, even main stream Churches are often promoting state sponsored discrimination of so called “sects” or small religions. This has been possible through their powerful constituencies in most European countries.

Therefore it is highly hypocritical of religious and political leaders to point their fingers at Switzerland if at home they discriminate their own minorities.

The case of Austria

In Austria, we have over 80 percent Catholics. Islam, with 500 000 Muslims constitutes the second largest faith community. There are approximately 600 religious minority groups. Only 14 faith communities enjoy official recognition by the state. With a population of 8.3 Million Austria has no less than 34 Anti–“Sect” offices operating in the country. Proportionally, this marks an unmatched record in Europe and even on a global scale.
Austria’s constitutionally granted neutrality of the state in religious matters is torpedoed by these facts. Members of religious minorities from Austria and neighboring countries report numerous cases of religious discrimination in schools, communities and in their workplace. Even established NGOs with a consultative status at the UN (ECOSOC), who are running peace initiatives or relief projects in line with the UN-Millennium Development Goals reported to FOREF, that their work has been severely hampered by the interventions of the so called “sect experts”.
Victims especially hold the state responsible for creating an atmosphere of religious intolerance and spiritual apartheid. As a result, in July 2008 the European Court of Human Rights has rebuked Austria for its discriminating legislation against non-traditional faith communities.


Institutionalised discrimination of religious minorities in Europe
In spite of many objections by faith communities, the Council of Europe- who is now severely condemning the Swiss minaret ban (rightly so) -has granted FECRIS (Fédération européenne des centres de recherche et d’information sur le sectarisme) consultative status in 2005. The named organization - under the banner of human rights - promotes discriminating anti-cult legislation throughout Europe. FECRIS receives substantial funding (over 90% of its annual budget- as quoted by the former SG of the organization) from the French government. The numerous protests of human rights defenders in the OSCE, COE, the UN and other Institutions have so far been in vain.

Recommendations to religious leaders, NGO representatives and human rights defenders
"We must learn to live together as brothers and sisters or perish together as fools."
Dr. Martin Luther King Jr.
Posted by Peter Zoehrer at 02:18