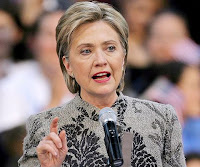 SECRETARY CLINTON: Good afternoon. It’s my pleasure to join you today for the release of the State Department’s Annual Report on International Religious Freedom. Every year, the State Department prepares a comprehensive review of the status of religious freedom in countries and territories around the world. We do this because we believe that religious freedom is both a fundamental human right and an essential element to any stable, peaceful, thriving society.

This is not only the American view; it is the view of nations and people around the world. It is enshrined in the Universal Declaration of Human Rights, it is protected by the International Covenant on Civil and Political Rights, and it is guaranteed by the laws and constitutions of many nations, including our own, where religious freedom is the first freedom listed in our Bill of Rights.
Because we believe in religious freedom and because we are committed to the right of all people everywhere to live according to their beliefs without government interference and with government protection, we are troubled by what we see happening in many, many places. Religious freedom is under threat from authoritarian regimes that abuse their own citizens. It is under threat from violent extremist groups that exploit and inflame sectarian tensions. It is under threat from the quiet but persistent harm caused by intolerance and mistrust which can leave minority religious groups vulnerable and marginalized.

During the past year, al-Qaida issued calls for further violence against religious minorities in the Middle East. Sufi, Shia, and Ahmadiyya holy sites in Pakistan have been attacked. So was a Syriac Catholic church in Baghdad just a few weeks ago. We received reports from China of government harassment of Tibetan Buddhists, house church Christians, and Uighur Muslims. And several European countries have placed harsh restrictions on religious expression.

These infringements on religious freedom strain the bonds that sustain democratic societies. With this report, we hope to give governments, NGOs, and citizens around the world valuable information about the status of religious freedom and a call to action for all of us to work together more effectively to protect it.

Our Office of International Religious Freedom and our embassies and consulates around the globe have worked for months to compile these 198 Country Reports. They have been assisted by NGOs, think tanks, news outlets, religious groups, and other governments. And I want to thank everyone who offered information and analysis, in particular the courageous activists who shared their stories with us, sometimes at great personal risk.

Now, one country that is not included in this report is the United States, and that is because the Department of Justice monitors threats to religious freedom in the United States and issues reports throughout the year. As some of you know, I said upon becoming Secretary of State that if we were going to issue reports on other countries, we would start issuing reports on ourselves. And we are keeping true to that position. And these reports on the United States are publicly available for review by everyone.

Obviously, we, like every country, must be vigilant in protecting the rights of religious minorities and building a society in which people of all faiths and people of no faith can live together openly and peacefully.

With this report, we do not intend to act as a judge of other countries or hold ourselves out as a perfect example, but the United States cares about religious freedom. We have worked hard to enforce religious freedom. We want to see religious freedom available universally. And we want to advocate for the brave men and women who around the world persist in practicing their beliefs in the face of hostility and violence.

This report reflects a broad understanding of religious freedom, one that begins with private beliefs and communal religious expression, but doesn’t end there. Religious freedom also includes the right to raise one’s children in one’s faith, to share one’s faith peacefully with others, to publish religious materials without censorship, to change one’s religion – by choice, not coercion, and to practice no religion at all. And it includes the rights of faith communities to come together in social service and public engagement in the broader society.

We have seen the valuable contributions made by religious communities in the global fights against poverty, disease, and injustice. Here in our own country, religious people, people of faith, have played a key role in many of our most important reform movements, from the abolition of slavery to the modern-day campaigns against human trafficking and forced labor. When the work of these communities is constrained or blocked, we all lose out, regardless of our particular beliefs.

Now, some people propose that to protect religious freedom, we must ban speech that is critical or offensive about religion. We do not agree. The Defamation of Religions Resolution adopted by the United Nations Human Rights Council again this year, and now pending before the General Assembly, reflects the other view. And the United States joins in all nations coming together to condemn hateful speech, but we do not support the banning of that speech. Indeed, freedom of speech and freedom of religion emanate from the same fundamental belief that communities and individuals are enriched and strengthened by a diversity of ideas, and attempts to stifle them or drive them underground, even when it is in the name and with the intention of protecting society, have the opposite effect. Societies in which freedom of religion and speech flourish are more resilient, more stable, more peaceful, and more productive. We have seen this throughout history. And as this report reflects, we see it in the world today.

So with this report as our guide, the United States will continue to advance religious freedom around the world as a core element of U.S. diplomacy. President Obama’s speech in Cairo in June of last year signaled a significant increase in our engagement with Muslim-majority countries and with religious communities around the world. Compared to previous years, many of the chapters in this year’s report provide much greater detail about what the United States Government is doing to engage faith-based groups and address the issues that affect them. Our embassies will continue to support inter-faith dialogue and work with religious groups across a full range of issues. And we will continue to speak out against the curtailing of religious liberty wherever and whenever it occurs.

I would now like to welcome Michael Posner, our assistant secretary for Democracy, Human Rights, and Labor, to elaborate further on this report and to answer your questions. Michael.

This Link leads you to the Country Reports on Europe & Eurasia