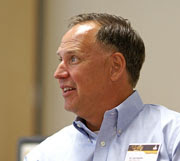 Iraq (MNN) ― A series of bombs and mortar attacks are targeting Christians in Iraq. The attacks focused on six districts with strong Christian majorities. President of Open Doors USA Carl Moeller says, "Christians around the world are witnessing what I'm calling a 'religiouscide.' Extremists Sunni and Shia are targeting the Christian community for extinction."

In Baghdad, Moeller says the situation is desperate. "One of my coworkers wrote to me. He said, 'Yesterday the city was almost closed. Three bridges across the river were closed. That's out of the Christian community, part of the city. I couldn't get across the River.'"

Moeller continues, "There were coordinated roadside bomb attacks within the Christian community there, killing five additional Christians. The situation, he says, is worsening day by day. There's no life for Christians in Baghdad anymore. We will be driven out of town, and nobody is helping us. Everybody, even the army and police, are afraid and not able to help."

Iraq had over one million Christians before the Iraq war. Moeller says, "There are less than 400,000 Christians in the entire country by our last count. And of that, 250,000 of them are living in refugee status within their own country. So, literally a 90 percent decline in the size of the Christian community."

Moeller is encouraging Christians to pray for these believers. "This is the International Day of Prayer for the Persecuted Church weekend coming up. We need to be on our knees, even now, for our brothers and sisters there in Baghdad. And we need to be using our voice in Washington, DC to exercise as much pressure as we can on the Iraqi government to protect the Christians there."

Moeller is hoping that pressure will help. If not, "This would be a massive humanitarian tragedy, if this ancient Christian community -- there for two millennia, predating Islam by hundreds of years -- would be extinguished in our time."

Open Doors is helping displaced Christians around Iraq. You can help them, too. Just go to http://www.OpenDoorsUSA.org to help.
Posted by Peter Zoehrer at 19:45