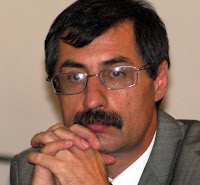 (New York) - A Kazakh court has sentenced the country's leading human rights defender to four years of imprisonment in a trial that did not meet basic fair trial standards, Human Rights Watch said today.
On September 3, 2009, the second day of his trial, Evgeniy Zhovtis was found guilty of manslaughter for a fatal automobile accident and arrested in the courtroom. Zhovtis is the founding director of the Kazakhstan International Bureau for Human Rights and the Rule of Law.   Read more ....

By Radio Free Europe
A court in Kazakhstan has sentenced a prominent human rights activist to four years in jail for manslaughter, RFE/RL's Kazakh Service reports.

Yevgeny Zhovtis, the director of the International Bureau for Human Rights and Rule of Law, was driving a car on July 26 in Almaty Oblast when he struck and killed a 35-year-old man. Kazakh human rights activist Andrei Sviridov told RFE/RL that Zhovtis refused to make any last statement after the verdict was announced, saying only that the trial was a "political punishment."   Read more ...