No fun for small churches in Putin's Russia 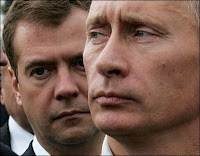 One of the most controversial figures – well known to the hundreds of religious minority groups in Eastern Europe – Alexander Dvorkin has been appointed Chairman of the Justice Department’s “Commission for the Implementation of State Expertise on Religious Science”.

Furthermore. Dvorkin has also been elected vice-president of the "European Federation of Research Centers for Information about Sects" (FECRIS). His range of attack includes not just Jehovah Witnesses, Scientology, the Hare Krishna community, Falun Gong or the Unification Church.  Alexander Dvorkin has been known to fight Christian groups, such as the Baptists, Pentecostals and many other Christian churches which have been growing impressively during the last two decades in the post communist era.
Read full text of commentary ...
Posted by Peter Zoehrer at 20:17