VIENNA: OSCE meeting on freedom of religion or belief gets underway with calls for better implementation of commitments 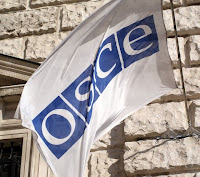 OSCE participating States have agreed to one of the most extensive sets of freedom of religion or belief standards, but governments are not doing enough to implement these commitments and let themselves be guided by them in tackling challenges, participants at the meeting were told.
"There can be no doubt that the promotion of freedom of religion or belief offers the best remedy to extremism, and adds an important safeguard to our collective security," said Ambassador Janez Lenarcic, the director of the OSCE Office for Democratic Institutions and Human Rights (ODIHR), which organized the meeting.
But he also stressed that religious commitment must not conflict with the respect for the rule of law: "Having obtained the status of a religious or belief community is not a licence for disregarding the law."
Read more ...
Posted by Peter Zoehrer at 10:01