Press release - OSCE:
"Everyone who experienced the tragedy of living through wars or totalitarian regimes knows about the value of the respect for fundamental human rights and dignity," Wladyslaw Bartoszewski, former Polish foreign minister, said at the opening.


"There is probably no generally valid recipe for preventing once and for all the return of the traumatic and incomprehensible breakdowns of civilization we have experienced in Europe and elsewhere in the world. But I place my hopes in the solid anchoring of values such as tolerance, openness and justice in society, as well as education."


Ambassador Janez Lenarcic, director of the OSCE Office for Democratic Institutions and Human Rights (ODIHR), said that there are various ways to implement the OSCE's human rights and democracy commitments, and states by necessity develop at different paces.

But he dismissed claims referring to country specificities as an excuse for lack of implementation:


"I believe this argument can be answered easily: no one naturally, or because of cultural specificities, enjoys being deprived of the rights and freedoms whose promise is enshrined in the OSCE commitments."


Some 1,000 government representatives, experts and human rights defenders are attending the two-week meeting, which reviews the progress states have made in putting their international commitments into practice.

"The meeting provides a unique opportunity to share experiences, identify shortcomings and support progress in light of our human dimension commitments," said Ambassador Nicolaos Kalantzianos, the representative of the Greek OSCE chairmanship and head of the OSCE task force in the Greek foreign ministry.

In addition to regular working sessions, more than 50 side events will focus on specific human rights concerns and country situations.

For PDF attachments or links to sources of further information, please visit: http://www.osce.org/item/39771.html 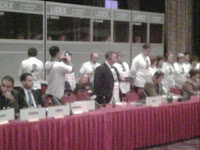 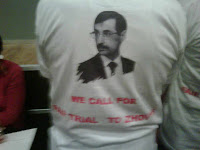 Protest at the OSCE Conference in Warsaw
this Monday morning during the speech of the Kazakh government delegate: Human Rights activists showed their "Free Evgeny Zhovits" & "Fair trial for Zhovits" T-shirts