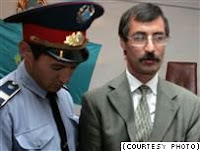 BACKGROUND: A Kazakh court has sentenced the country's leading human rights defender to four years of imprisonment in a trial that did not meet basic fair trial standards, (Human Rights Watch). On September 3, 2009, the second day of his trial, Evgeniy Zhovtis was found guilty of manslaughter for a fatal automobile accident and arrested in the courtroom. Witnesses told (out of court), a young man wlked across the highway and there was no way to for Mr. Zhovits to avoid the accident. Evgeny Zhovtis is the founding director of the Kazakhstan International Bureau for Human Rights and the Rule of Law.


1.International Committee for Observation of the Law in the Legal Case against Evgeny Zhovtis expresses deep condolences to the family and friends of Kanat Moldabayev, who tragically died in the traffic accident. The Committee fully realizes the tragedy of the situation, when concurrence of circumstances led to the loss of life.

2. At the same time, the Committee points out that developments after the incident have generated wide public and international response, various interpretations of what had actually happened as well as attempts of manipulation of the public opinion and imposition of pressure on the investigation.


3. We call on the political parties, movements, NGOs, and mass media of Kazakhstan to refrain from politicization of the case and its consequences, distorting of the information around the case, or using it for their own interests.


4. We urge the law enforcement bodies of Kazakhstan to ensure maximum impartiality and absence of bias during the investigation of the case and to use all possible technical and legal tools to examine the details and circumstances of the accident.
5. We urge the courts of the Republic of Kazakhstan to provide the highest possible thoroughness and fairness during consideration of this case in order to establish the truth.
6. The Committee knows Evgeny Zhovtis as a sincere advocate of human rights and an outspoken opponent of the authorities. In this regard, we appeal to all levels of power in the Republic of Kazakhstan to avoid any possible temptations, which may come up in the course of review of this case, and preclude any kind of pressure on the investigation or the judicial bodies.
7. The International Committee believes that this case which is closely followed at home and internationally should become a maturity test for all government institutions of Kazakhstan, the constitutional principles of separation of powers, and for independence of investigation and courts.